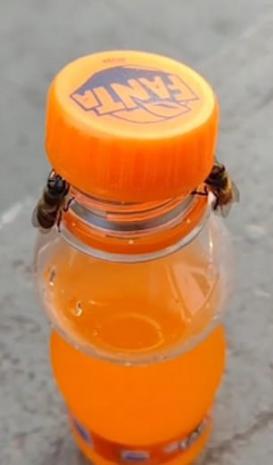 Footage captured in São Paulo, Brazil, shows the two bees position themselves on either side of the bottle and use their legs to push the cap up.

Just moments later, the bees manage to lift the top off the bottle of sugary drink and watch as it falls onto the ground.

Following the impressive scenes, which were captured on May 17, the filmer told Viral Hog: 'The video was recorded during my lunch break from work. I got a soda from a customer but soon the bees stole it.'

The footage has since been met with an array of responses from social media users.

One user said: 'That video is amazing but also terrifying. How the hell have they worked that out?'

Another added: 'We can just hire them and pay them in Fanta.'

A third person commented: 'I for one welcome our insect overlords.'

Scientific studies have shed more light on how bees work together and cooperate with each other.

For example, in 2018, Harvard University researchers revealed how a swarm of bees will stick together and move in unison when their nests are rattled.

Scientists spent months shaking and rattling swarms of thousands of honeybees to understand how the insects can work together to keep their swarm in one piece.

They discovered that bees can sense the direction their neighbours are moving in and follow the movements of their fellow insects.