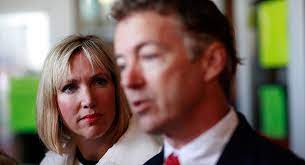 What a great thing it must be to have a wife like Kelley Paul, the wife of Sen. Rand Paul (R-KY).

It's not easy to be the wife of a politician. There are a ton of things you have to put up with, for sure.

But one of the things that Kelley Paul shouldn't have to put up with is the threats and attacks on her husband. As we reported previously, she and her husband received a death threat in the mail – – a suspicious package with white powder including a picture of her husband beaten up with a rifle pointed at his head and the threat, "I'll finish what your neighbor started."

"I'll finish what your neighbor started you motherf-----" pic.twitter.com/ZX4sw2BEjd

Rand Paul's neighbor attacked him from behind, breaking six of his ribs and causing him serious lung damage, with part of his lung later having to be removed.

Even more than that, Kelley Paul shouldn't have to see Democrats and liberal blue-check Twitter encouraging violence against her husband or cheering attacks against him without any consequence for their actions, as she explains. Not even a Twitter suspension. She names names and goes after a Democratic PAC she thinks has been promoting some of this.

I got the death threat letter and called the FBI. This kind of violent threat is fomented against Rand daily by @ReallyAmerican1 , a Dem PAC that pays thugs like @mmpadellan to celebrate the assault that nearly killed Rand. @DNC ignores. @richardmarx was inciting more violence