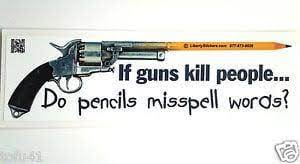 This simple, deadly weapon can be made by anyone—even a child—with unpowered hand tools in an hour's time using $5 worth of materials, most of which are available around the house anyway. In traditional form it's reusable an unlimited number of times, and modern plastics have rendered its disposable version electronically undetectable. You can clear a room with such a weapon (more of a hand-held directional grenade than a gun—sort of a recycleable Claymore mine) and it's just one of hundreds of similar time-proven designs.

Complete instructions for building this simple, deadly weapon could be given in half the space I'm using here and not require a single illustration. Or it could be done as a line-drawing and not require a word. Either way, the results would Xerox splendidly and reduce, for effortless distribution, to the size of a 3X5 card.

No, I'm not making this up.

Self-styled liberal academics and politicians generally suffer an ancient Greek prejudice against the manual trades and often fail to comprehend what it means, with respect to banning weapons, that we're a nation of basement lathe-operators. Americans unknowingly tend to follow Mohammed's precept that, whatever a person's station in life, he or she should also do something manual, if only to stay grounded in reality. And if there's any lingering doubt about the ease of basic weaponscraft, ask the Israelis who, early in their nation's history, turned out submachineguns little more complicated than what I'm discussing here, in automotive garages lacking even a lathe.

Civilized restraint precludes my describing the weapon in any greater detail here. Many gun enthusiasts will know by now exactly what I refer to, anyway. It's in everyday use in much of the Third World, especially where governments foolishly believe that they've outlawed weapons. But that, of course, is impossible—unless the same governments want to try repealing the last 1000 years of civil engineering.