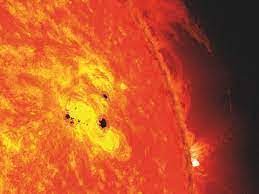 Solar activity refers to the state of the sun's magnetic field and associated phenomena: sunspots, flares, solar wind and coronal ejections. During periods of minimal solar activity, such events are often uncommon and weak. During solar maximum, they're at their strongest and most frequent. Magnetic field fluctuations on the sun can happen on drastically different timescales, ranging from seconds all the way to billions of years. When astronomers speak of a "slowdown" or a period of quiescence in the sun's activity, it doesn't mean the sun will stop shining, but that there's a slowdown in activity.

The sun has one particular rhythm, lasting approximately 11 years, in which its polar magnetic field flips polarity. Sunspots serve as an indicator of this change. Indeed, it's often known as "the sunspot cycle."

Although sunspots themselves were first observed in detail by Galileo, Christoph Scheiner and others from 1609 onwards, according to the British Library, the cyclical nature of their appearance and disappearance was first noted in 1775 by Danish astronomer Christian Horrebow.