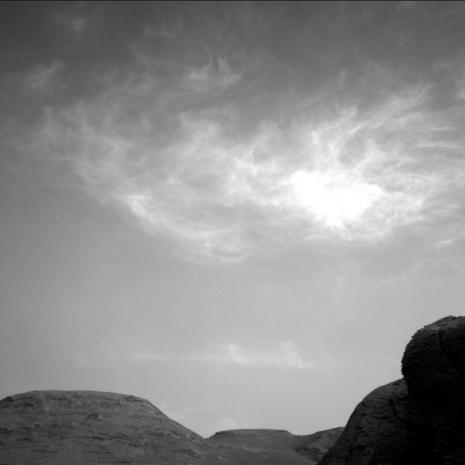 The clouds, which were photographed in March 19, Curiosity's 3,063rd sol (Martian day) usually only form during the coldest part of the year on Mars' equator.

The clouds, described as 'early' according to the space agency, started forming in early January and are at a higher altitude than normal.

'Most Martian clouds hover no more than about 37 miles (60 kilometers) in the sky and are composed of water ice,' NASA wrote in a statement. 'But the clouds Curiosity has imaged are at a higher altitude, where it's very cold, indicating that they are likely made of frozen carbon dioxide, or dry ice.

'Scientists look for subtle clues to establish a cloud's altitude, and it will take more analysis to say for sure which of Curiosity's recent images show water-ice clouds and which show dry-ice ones.'

It's unclear at what altitude these clouds formed above the Martian surface.

'Noctilucent clouds grow brighter as they fill with crystals, then darken after the Sun's position in the sky drops below their altitude,' NASA explained.

The space agency added that the brightness of the clouds allows scientists to figure out how high they are.