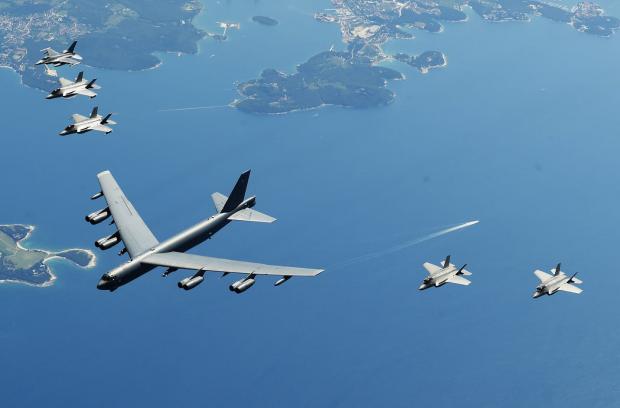 Those would include the five that border Russia – Norway, Poland, Estonia, Latvia and Lithuania – of course.

The B-52s (designed to carry nuclear weapons during the Cold War), like their fellow nuclear-capable long-range bombers the B-1 and B-2, started deployment to Europe in 2018 under the aegis of the Pentagon's Bomber Task Force and so far this year have maintained a ready presence in Europe, in one instance landing at a Norwegian air base within the Arctic Circle.

Monday's transcontinental flights were codenamed Operation Allied Sky and were the second such since last August when six B-52s accompanied by 80 NATO fighter jets flew over the thirty member states in a single day. The message sent by the operations shouldn't be difficult to understand.

If you're one of two nations in Europe not enrolled in (conscripted, dragooned into) NATO's continental military phalanx – in other words, if you're Russia and Belarus – the handwriting is in the sky.