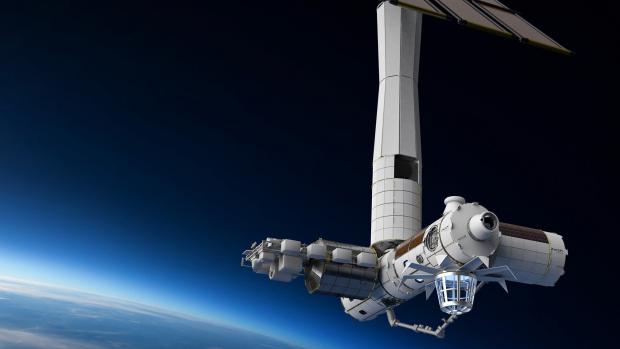 They are adding modules to the International Space Station. Axiom will separate their modules from the Space Station around 2024-2030. They will have first commercial space station in our solar system starting in 2024, to ensure a brighter future for everyone on Earth and set our course for life beyond it. The ISS will be in space until 2026-2030. The ISS will last until 2030 if it gets extended operation support.

The four radial bulkheads for the first Axiom hub module are currently being machined in Europe by our partner Thales Alenia Space (TASI). These bulkheads provide the structure to which our radial common berth mechanisms (CBMs) and hatches will attach. Together, the four bulkheads with their accompanying hardware form a cylindrical section, providing four ports to which other station elements – including docking adapters – can attach. The cylindrical protrusions seen on the bottom half of the bulkhead will become pass-throughs, allowing power, data, and fluids to pass from one element to another, including between Axiom hub and ISS.

Axiom will be able to generate the same amount of power as the ISS using 6 times fewer solar panels. This is due to the improvements in solar panel efficiency in the decades since the ISS was put together.