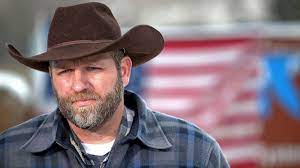 But his campaign, teased in the filing of paperwork last month if not yet official, is anything but a joke.

These days, Bundy—who along with his father Cliven became national icons of far-right resistance in the Obama era—is perhaps best known as the founder of the "People's Rights" network. Since last spring, the group has led rowdy protests outside the homes of elected officials. In a move that foreshadowed the Jan. 6 attack on the U.S. Capitol, the group stormed Idaho's own Capitol building last summer.

The tactics are pure political intimidation, Bundy's opponents have charged. Now, his seeking elected office is rattling some Idahoans, who say a campaign represents another step toward legitimizing anti-democratic tactics on the right.

Either way, it could get ugly.

"I've got a phone number for a Boise Police liaison," Lee Joe Lay, a People's Rights organizer for Boise, told The Daily Beast, conceding even he was worried about someone taking the movement's message too far. "If we find someone out there that's locked and loaded and ready to do this, I make that call."

Part 2: Is America Heading Into Its Twilight Years? Leaderless leaders!