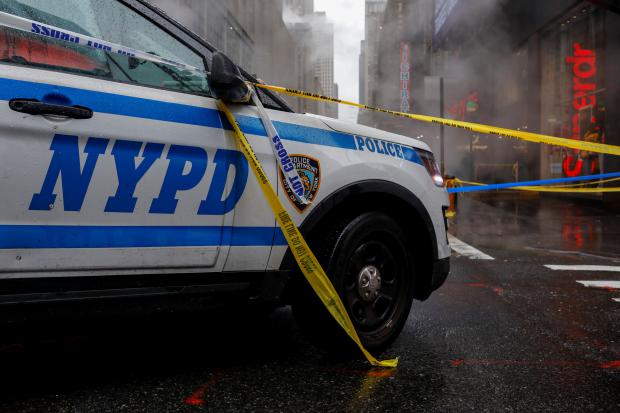 The Guardian Angels have stepped up patrols in Manhattan's Chinatown following a brutal attack on an Asian woman that took place in broad daylight.

Members of the volunteer crime-fighting organization - easily distinguished by their bright red berets - were pictured protecting the neighborhood in exclusive images captured by DailyMail.com on Thursday.

In recent months, violent attacks on Asians have surged across the Big Apple as overall crime continues to skyrocket.

'People can't even go out to have a little lunch in New York City without being afraid that someone is going to harm them,' Guardian Angel Benjamin 'E.Q.' Garcia told DailyMail.com during his daily patrol of the area.

His presence comes as a relief to Chinatown residents reeling from the fact a 55-year-old woman was randomly sucker-punched as she walked along bustling Bayard Street on Monday afternoon.

Her assailant has been identified as serial felon Alexander Wright, a homeless man who has clocked up eight arrests in the past year alone.

Many have blamed Mayor Bill de Blasio's bail reforms for the crime spike, which have put suspects straight back onto the city's streets, even if they've been arrested for violent crimes.

Garcia has been volunteering with the Guardian Angels for 35 years and says it feels as if New York City is returning to the 1980s and 1990s when shootings, murders and muggings were rampant.

'If this continues the way it's going, this could be one of the worst summers on record,' Garcia predicted.