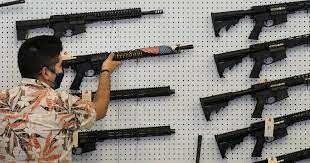 "Like the Swiss Army Knife, the popular AR-15 rifle is a perfect combination of home defense weapon and homeland defense equipment. Good for both home and battle, the AR-15 is the kind of versatile gun that lies at the intersection of the kinds of firearms protected under District of Columbia v. Heller, 554 U.S. 570 (2008) and the United States v Miller, 307 U.S. 174 (1939)," Benitez wrote.

"Yet, the State of California makes it a crime to have an AR15 type rifle," Benitez continued. "Therefore, this Court declares the California statutes to be unconstitutional."

On several pages of the ruling, the judge recommended the rifle should be protected under the Second Amendment for its "militia readiness."

"Government is not free to impose its own new policy choices on American citizens where constitutional rights are concerned," he added. "California may certainly conceive of a policy that a modern rifle is dangerous in the hands of a criminal, and that therefore it is good public policy to keep modern rifles out of the hands of every citizen. The Second Amendment stands as a shield from government imposition of that policy."

The office of Attorney General Rob Bonta released a statement after the ruling said it would immediately appeal the decision.

Why don't people stand in court as men/women rather than the indictment person? That person on the paper ain't you. It's a fiction somebody made up to trick you into believing that they are talking to you. --- Fourth Amendment: the right to private property. Your property isn't an assault weapon unless you want it to be. It's your private property. Do you own it? You call it what it is. They don't have the right UNLESS THEY OWN YOU. --- First Amendment: right to travel with your property. --- Ninth Amendment: you have any any right you want, as long as you state it as a right of yours, and as long as it doesn't directly threaten or harm any other man/woman or his/her property. But you must state it as a man/woman, not their person. https://redress4dummies.files.wordpress.com/2018/03/office-of-person1.pdf