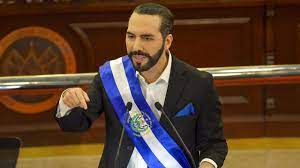 In a pre-recorded video, El Salvador President Nayib Bukele made a somewhat shocking announcement in the final hours of the Bitcoin 2021 conference in Miami on Saturday afternoon.

If the legislation is passed by lawmakers (Bukele does have a majority of votes in El Salvador's congress), El Salvador would become the first country to formally adopt the digital currency.

"In the short term this will generate jobs and help provide financial inclusion to thousands outside the formal economy," Bukele said.

As Decrypt reports,  Bukele's video played during a talk by Jack Mallers, founder of Strike, a crypto wallet built on the Lightning Network.

Mallers said on stage that he had lived in El Salvador for three months and discovered that some 70% of the population there does not have a bank account, and 20% of the country's GDP comes from remittances sent by migrants to family members.

Strike launched in El Salvador in March, and Mallers said the app has been "onboarding" 20,000 El Salvadorans per day.

He framed Bukele's forthcoming legislation as the next step in a partnership between Strike, which will open an office in El Salvador, and the local government there.