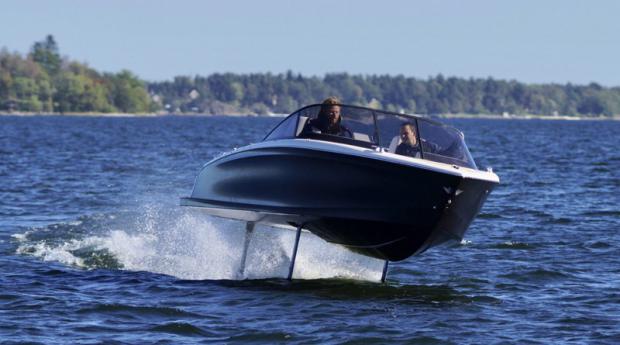 On land, despite a rocky start, Formula E has steadily grown its audience some 24 percent a year, particularly among younger viewers, and the Extreme E electric off-road series drew 18.7 million viewers in its first race – showing that there's definitely interest in competitive electric racing. The E1 series seeks to get things started offshore, as an electrified version of the F1H20 powerboat racing series, and it's already fully sanctioned by the international powerboat racing authority, the UIM.

Today, we get our first look at the race boats, and they're certainly going to raise some eyebrows. A given amount of energy doesn't tend to go a long way in the high-drag environment of water, so the E1 team has decided to go with a hydrofoil design, that'll lift these boats some 40 cm (16 in) over the surface of the water, nearly eliminating drag and looking extremely cool in the process.

The Racebird boats, designed by Seabird Technologies and Victory Marine will feature full carbon bodies with wings out the sides that fold under to form the front hydrofoils, and an extended wing tail on the outboard motor for the rear foil. The cabin is fully enclosed, as with the high-speed gasoline powerboats, so they'll look like spaceships skimming the surface.

At 7 m (23 ft) long and 3 m (9.8 ft) wide including those foil wings, the boats will weigh around 800 kg (1,764 lb) in total and reach speeds up to 50 knots (93 km/h, 58 mph). It's a long way from the death-defying 250-km/h (155-mph) top speeds of the gasoline-powered F1H20 class. Indeed, there are plenty of speedboats and cigarette boats on the market capable of going quicker, but electric boating is difficult and this is a start. And the foiling design could make head-to-head racing more competitive, since there's basically very little wake to interfere with a following boat.