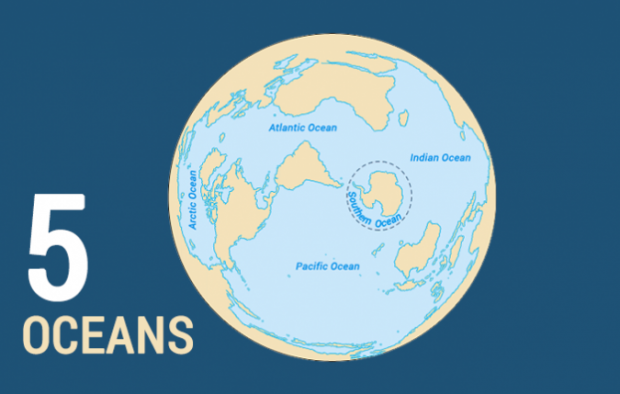 Cartographers at the National Geographic have finally recognised Antarctica's Southern Ocean on their maps, bringing their count of Earth's oceans to five.

The society — which has been releasing maps of the world since 1915 — publicly announced their new policy yesterday, to coincide with World Ocean Day.

National Geographic have defined the ocean as being bound by the current that flows around Antarctica — with a northernmost reach up to the 60th parallel south.

The Southern Ocean joins the Arctic, Atlantic, Indian and Pacific on their charts, although the Antarctica-encircling body's status remains internationally contested.

'The Southern Ocean has long been recognized by scientists,' explained National Geographic Society geographer Alex Tait in the announcement.

'But because there was never agreement internationally, we never officially recognized it. It's sort of geographic nerdiness in some ways,' he added.

'We've always labelled it, but we labelled it slightly differently [than the other oceans]. This change was taking the last step and saying we want to recognize it because of its ecological separation.'

The National Geographic said that Mr Tait — who oversees changes to all the maps they publish — and their map policy committee have been debating the merits of acknowledging the Southern Ocean as a body in its own right for years now.