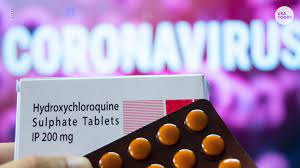 Trump Derangement Syndrome might be a silly term, but the phenomenon itself was real. Almost every time the former president opened his mouth, members of the media and expert class would run forward with their list of reasons why he was wrong — before actually checking to see if he was.

The immediate condemnation of hydroxychloroquine, an antimalarial drug touted by Trump during the early days of the pandemic, is a great example. Trump claimed that the drug could be used as an effective treatment against COVID-19, and within minutes, there were dozens of headlines slamming him for pushing an "unproven" and "disproved" medication. The health experts agreed and warned the public that hydroxychloroquine, a drug that had been in common use for more than 60 years, could be "dangerous."

As a result, the Food and Drug Administration pulled its emergency use authorization for the drug and suspended trials testing its effectiveness. The World Health Organization urged the international community to abandon using hydroxychloroquine. And Twitter even restricted the account of Trump's son, Donald Trump Jr., because he posted a video of several doctors touting the effectiveness of the drug, which amounted to "spreading misleading and potentially harmful misinformation," according to the social media giant.