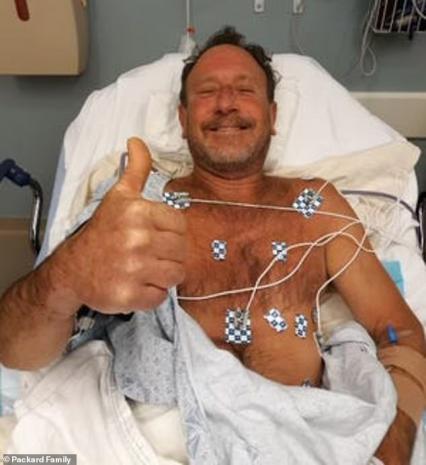 Michael Packard, 56, had been a commercial lobster diver out of Provincetown, Massachusetts for 40 years and was going on a routine lobster dive off the coast of Cape Cod last Friday morning when he said he 'felt a huge bump and everything went dark.'

At first, he said he thought he had been attacked by a shark, but when he realized he did not feel any sharp teeth and was not in pain, he began to figure out what had happened.

'I realized, oh my God, I'm in a whale's mouth ... and he's trying to swallow me,' Packard told WBZ-TV following the encounter. 'And I thought to myself OK, this is it - I'm finally - I'm gonna die.'

Packard, who is an experienced diver, started to think about his wife and his 12 and 15 year old sons, and began to struggle inside the beast's mouth until, he said, he saw a light and the whale started shaking his head side-to side.