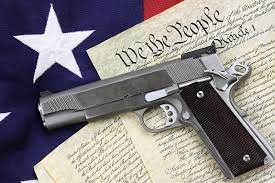 Over the past 30 years, I've been paid to write almost two million words, every one of which, sooner or later, came back to the issue of guns and gun-ownership. Naturally, I've thought about the issue a lot, and it has always determined the way I vote.

People accuse me of being a single-issue writer, a single-issue thinker, and a single-issue voter, but it isn't true. What I've chosen, in a world where there's never enough time and energy, is to focus on the one political issue which most clearly and unmistakably demonstrates what any politician—or political philosophy—is made of, right down to the creamy liquid center.

Make no mistake: all politicians—even those ostensibly on the side of guns and gun ownership—hate the issue and anyone, like me, who insists on bringing it up. They hate it because it's an X-ray machine. It's a Vulcan mind-meld. It's the ultimate test to which any politician—or political philosophy—can be put.

If a politician isn't perfectly comfortable with the idea of his average constituent, any man, woman, or responsible child, walking into a hardware store and paying cash—for any rifle, shotgun, handgun, machinegun, anything—without producing ID or signing one scrap of paper, he isn't your friend no matter what he tells you.

If he isn't genuinely enthusiastic about his average constituent stuffing that weapon into a purse or pocket or tucking it under a coat and walking home without asking anybody's permission, he's a four-flusher, no matter what he claims.

What his attitude—toward your ownership and use of weapons—conveys is his real attitude about you. And if he doesn't trust you, then why in the name of John Moses Browning should you trust him?

If he doesn't want you to have the means of defending your life, do you want him in a position to control it?

If he makes excuses about obeying a law he's sworn to uphold and defend—the highest law of the land, the