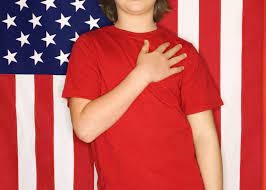 Flag Day is upon us, with the Fourth of July not far behind. No better time for a frontal assault on a cherished American ritual—the Pledge of Allegiance.

Though conservatives will be most aghast at this undertaking, the open-minded ones will soon discover they should be among the pledge's greatest critics.

Before I open fire, a brief explanation for international readers: The Pledge of Allegiance is recited by children across America at the start of start of each school day. It's also incorporated into many meetings held by federal, state and local governments and private groups as well.

Standing and facing the flag with hand over heart, one recites: "I pledge allegiance to the flag of the United States of America, and to the republic for which it stands, one nation under God, indivisible, with liberty and justice for all."

A Government Loyalty Oath Written by a Socialist

Many who consider the pledge a cornerstone of conservative values will be surprised to learn it was written by a Christian Socialist named Francis Bellamy, who was run out of his pulpit at a Boston church for preaching against capitalism, and who called Jesus Christ a socialist.

How the U.S. unleashed Agent Orange in its own backyard:

Zen & the Art of Federal Employment