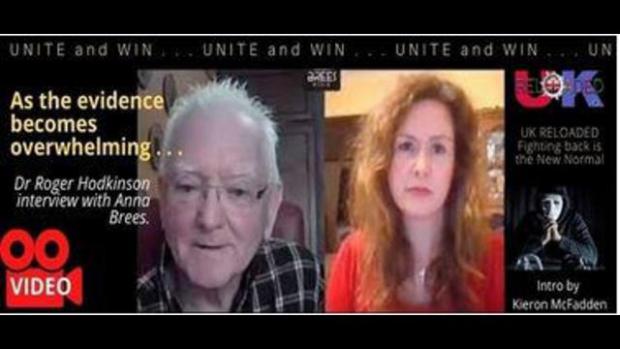 Another datum worthy of note is what Dr Hodkinson tells us about the intimidation to which even senior politicians are being subject in an effort to get them to keep heir traps shut.

But as Dr Hodkinson also points out, the evidence of gov fraud over the Covid hoax has become overwhelming, from which we conclude, as we stated weeks go, the mother of all f**k ups has spawned the mother of all cover ups.

There is no way the criminals behind this monstrous humanitarian crime are going to be able to keep a lid on it much longer. The noise will become so great even the semi-comatose will wake up.

As the guilty parties realise the danger they are now in from exposure, their desperation to prevent the inevitable becomes palpable.

This is a quote from the Bitchute intro that sets the scene for this video and it reminds us that Dr Hodkinson is no slouch or mere "conspiracy theorist" (whatever that propaganda epithet means exactly) for he has a very impressive track record and impeccable credentials.

Dr Hodkinson is a board certified pathologist in the USA and Canada. He studied at Cambridge University in the UK before emigrating to Canada in 1970. He has held a number of leadership positions in his profession both in his own province of Alberta and nationally. His career has spanned general practice, community hospitals, academia, CEO of a large retail clinical laboratory and various other entrepreneurial activities in private medicine.

Dr Hodkinson has a particular interest in molecular diagnostics – the science of identifying DNA for various cutting edge applications in real world medicine.

He has spent 20+ years in the trenches of public health as an activist tackling head-on the biggest public health crisis of our time before the Covid epidemic, namely the predatory marketing of tobacco and governments reluctance to control it, and for which he was made Citizen of the Year in 1994."

Dear vaccinated people: Are you angry yet?