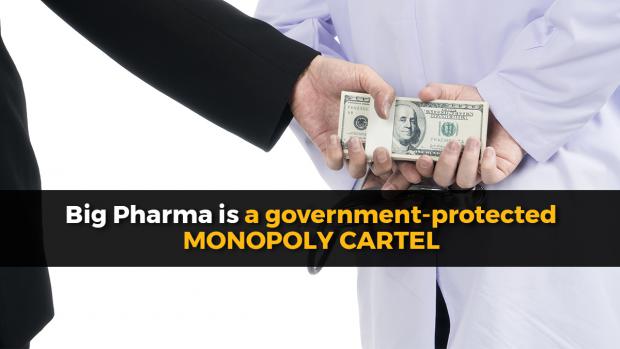 (Natural News) From August 2013 to December 2018, the pharmaceutical industry paid out more than $12 billion (in disclosed payments) to 1,036,163 doctors, 1,249 teaching hospitals, and 2,191 companies. The current model of "medicine" incentivizes bribery, kickbacks, and institutional control over the scientists, the media and medical professionals. This Big Pharma-dominated system is also legally permitted to market directly to consumers, allowing for perpetual brainwashing of the general population and the medical professionals.

Even worse, Big Pharma is set up in a way to generate high returns for their shareholders; the system is NOT incentivized to promote a healthier population. This high-return incentive brings out the most appalling behavior and the most anti-human business decisions.

Big Pharma has convinced entire populations there is no natural immunity, no solutions for infections

For instance, during the covid-19 outbreak, some doctors were brave enough to use safe, inexpensive antivirals such as hydroxychloroquine, zinc, ivermectin, glutathione, vitamin D and C. But instead of promoting safe, anti-viral treatments that are easy to manufacture, the Big Pharma establishment fought to suppress treatments and other approaches to help the population mount a healthy immune response.

This is nothing new, for those who understand how this monopoly works. Over the decades, nutrition and traditional herbal medicine have been systematically removed from Western medicine. This suppression of vital information and natural immunity solutions ultimately paves the way for emergency use authorization of "too big to fail" vaccine investments. As these corporations fight for dominance, their influence over the regulatory agencies, the media, and the "science" leads to unethical business activities and is the reason why no pharmaceutical company can be trusted.

In 2020 alone, Pfizer, GlaxoSmithKline, Johnson & Johnson, Sanofi, Gilead and AstraZeneca generated a combined revenue stream of $266 billion. Even though the industry is flush with cash, the U.S. federal government handed the Big Pharma monopolies at least $18 billion in taxpayer funds to develop covid-19 vaccines. This siphoning of wealth from the American people is conducted without a single vote from the people themselves. Congress does not represent the Will of the People; they, too, are bought off by this Big Pharma monstrosity.

'Not a Drill': Infrastructure Bill Could Sink American Crypto Industry

NDI® 5 - The Whole World is Your Studio