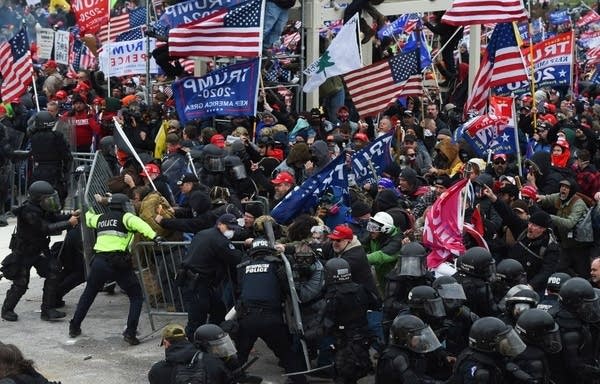 Tucker Carlson on Thursday night doubled down on his claim earlier this week that the Capitol rioters who were named as 'unindicted co-conspirators' in court documents were actually federal agents, orchestrating the attack.

Carlson told his viewers that the FBI had a long history of infiltrations and pushing people to commit crimes, and said he believed they had done it again.

'If that happened, and we believe it did happen, it would not be out of character for the FBI. It they've done things very much like that before,' he said.

'That is beyond dispute.'

The Fox News host said his questions had led to the media becoming 'hysterical when we mentioned it.'

He continued: 'You can't say that, they screamed, that's not allowed!

'The geniuses at Twitter weighed in to inform us that agents of the FBI were just FBI informants, so shut up. Hilarious.

'It could not be more obvious at this point that the government is in fact hiding something, probably quite a few things.'

He added: 'Best to abandon theatrics and find out what they are hiding, that's our job.'

Carlson had on Tuesday night referenced a report in Revolver News, which looked into the indictments of the around 400 people charged over the January 6 unrest.