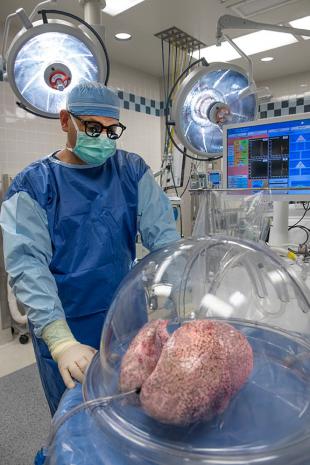 Transplants are necessary for only the most serious COVID-19 cases. In these patients - pretty much always patients with comorbidities - COVID-19 ravages the lung tissue, leaving nodules in the lungs incapable of absorbing oxygen from the air and transmitting it to the blood stream. For many patients, the grueling procedure may be the only solution after experiencing the worst lung damage caused by the virus - when the body fails to properly respond to, and heal from, the hyper-inflammatory response provoked by COVID-19.

John Micklus's battle with Covid-19 began last Christmas and ended five weeks later with lungs so irreversibly damaged that doctors said there was nothing they could do to save him.

"The doctor's recommendation was to get my affairs in order," Micklus said. The 62-year-old called his wife from his hospital bed in southern Maryland. She, in turn, desperately called several physicians, and eventually learned of one last option: A double-lung transplant.

Micklus was transferred to the University of Maryland Medical Center in Baltimore, where a rigorous assessment qualified him to receive lungs from a matched donor days later. He was discharged from the hospital on March 30, marking the center's second successful lung transplant in a Covid survivor.

Micklus and other double-lung transplant survivors suffered from a phenomenon that scientists call the "honeycomb change."

All of that can cause the deposition of yellow fibrotic scar tissue, creating a "honeycomb change" that makes the lungs completely solid, said David Kleiner, who heads autopsy pathology in the National Institutes of Health Clinical Center in Bethesda, Maryland.

This BAD Journalism is completely unsupported by *ANY* Data or numbers! Also worth mentioning is that Ventilators have been documented as hazardous for long term use / lung health & that they were grossly misused to blow out the lungs of "Covid" patients:(