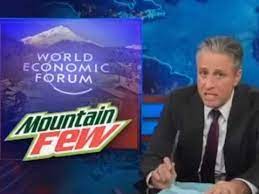 Stewart's agitprop was the stuff of legend during his run on The Daily Show. He programmed an entire generation to think he was the truth-telling court jester when he was really always The Davos Crowd's Pied Piper. All he had to do was bust open a few easily-busted lies while mugging for the camera.

He was funny when he got his first break on Dennis Miller Live on HBO back in the early 90's. I didn't have cable back then and had a co-worker tape them for me. Stewart stood out. He's a talented guy, always has been. I don't begrudge him his talent. It's one of the hallmarks of evil people, most of them are admirably talented at something.

I also remember back then Miller was a leftie, especially him trying to desperately pin down Charlton Heston on gun control. He was outmatched by Chuck. Miller tapped brilliantly into the Gen-X iconoclasm of the time. He was our high priest of irony. He was also smart in a way that didn't give a damn whether you got the reference or not.

Can't keep up, Cha-chi? Go melt some Ice-9 in a Sanka to chill out on Harvey Weinstein's casting couch while jerking off to reruns of I Dream of Jeannie while getting ready for your closeup.

"Stop me before I sub-reference…. again." Classic Miller.

Seven Words That Curse the State