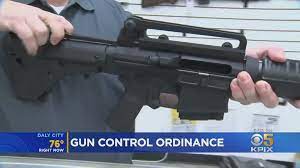 According to Mercury News, the San Jose City Council voted unanimously to approve a new law that requires all gun stores to record firearm purchases on video. What's odd is that most gun stores already have surveillance cameras. However, the new law begins in September and will require shopowners to also record audio of all firearm and ammunition sales.

Mayor Sam Liccardo said the new law makes it more difficult for "straw sales," in which a person buys a firearm or ammo for someone unable or unwilling to purchase and then transfers the goods to that person.

"We know a significant number of crooks and gangs get firearms through straw purchasing," Liccardo said. "This set of ordinances is really focused on narrowing the flow of guns to those which are clearly legal and hopefully doing something to deter the flow of guns that are unlawful to own, that is to persons who are not entitled to own guns because of prior convictions or other reasons."

The San Jose legislation is the first of its kind in the state and will likely be challenged in court.