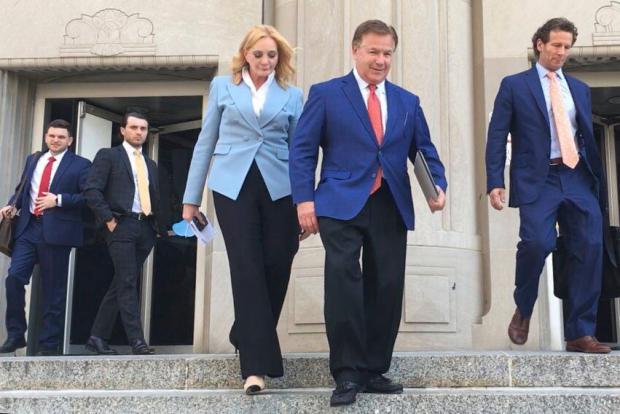 'Checking out my new AR,' reads the caption. McCloskey is seen in the photos wearing a curt smile and brandishing the weapon with a finger just above the trigger. One photo also includes his wife Patricia giving a thumbs up.

The gun-toting St. Louis couple, both personal injury attorneys in their 60s, appeared in court Thursday where they admitted to a judge that their actions had put peaceful protesters at risk of serious injury.

They agreed to give up the weapons used in the incident. On leaving court where Mark told reporters 'I'd do it again'.

The McCloskeys shot to notoriety last June when they were caught on camera emerging from their home in an upscale neighborhood in Missouri brandishing firearms at protesters marching past.

Mark, who fast became the GOP's poster boy and spoke at August's Republican National Convention in support of Donald Trump, is now running for US Senate.

Following the plea deal last Thursday, McCloskey shared a series of tweets defending his and his wife's actions and bragging about the outcome of his court appearance.

'A year ago, the mob came to my door to attack my family— I backed them down,' McCloskey shared last Thursday at 4.05pm. 'The mob came for me, the media attacked me & prosecutors tried to punish me for defending my family. They dropped all charges, except for a claim I instilled "imminent fear" in the mob. I'd do it again.'