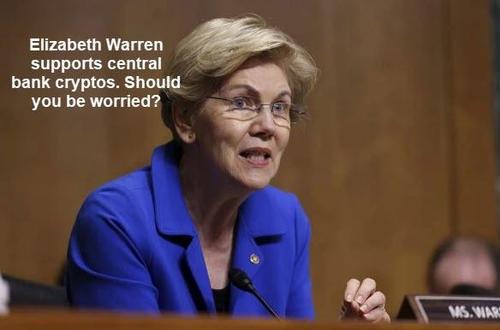 Authored by Mike Shedlock via MishTalk.com,

The rise of private cryptocurrencies motivated the Fed to start considering a digital dollar to be used alongside the traditional paper currency.

Politico writer Victoria Guida believes this represents a 'Once in a Century' Bid to Remake the U.S. Dollar.

The idea of creating a fully digital version of the U.S. dollar, which was unthinkable just a few years ago, has gained bipartisan interest from lawmakers as diverse as Sens. Elizabeth Warren (D-Mass.) and John Kennedy (R-La.) because of its potential benefits for consumers who don't have bank accounts. But it's also sparking strong pushback from those with the most to lose: banks.

"The United States should not implement a [central bank digital currency] simply because we can or because others are doing so," the American Bankers Association said in a statement to lawmakers this week. The benefits "are theoretical, difficult to measure, and may be elusive," while the negative consequences "could be severe," the group wrote.

The explosive rise of private cryptocurrencies in recent years motivated the Fed to start considering a digital dollar to be used alongside the traditional paper currency. The biggest driver of concern was a Facebook-led effort, launched in 2019, to build a global payments network using crypto technology. Though that effort is now much narrower, it demonstrated how the private sector could, in theory, create a massive currency system outside government control.

Now, central banks around the world have begun exploring the idea of issuing their own digital currencies — a fiat version of a cryptocurrency that would operate more like physical cash — that would have some of the same technological benefits as other cryptocurrencies.

That could provide unwelcome competition for banks by giving depositors another safe place to put their money. A person or a business could keep their digital dollars in a virtual "wallet" and then transfer them directly to someone else without needing to use a bank account. Even if the wallet were operated by a bank, the firm wouldn't be able to lend out the cash. But unlike other crypto assets like Bitcoin or Ether, it would be directly backed and controlled by the central bank, allowing the monetary authorities to use it, like any other form of the dollar, in its policies to guide interest rates.

The Federal Reserve Bank of Boston and the Massachusetts Institute of Technology's Digital Currency Initiative are aiming next month to publish the first stage of their work to determine whether a Fed virtual currency would work on a practical level — an open-source license for the most basic piece of infrastructure around creating and moving digital dollars.