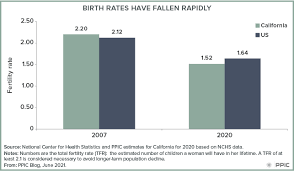 Data shows that while the Golden State's population continues to grow old, young adults are having fewer kids.

John Moorlach, a former state senator and Orange County supervisor, told The Epoch Times that the long-term impact of the state's dropping birth rate is "hard to predict," because the current administration's border policy has made immigration numbers unclear.

But if immigration is minimized and there is zero growth, Moorlach said "the old rule in businesses" would apply: "If you're not growing, you're dying."

In 2019, California had 11.3 births for every 1,000 residents, according to the report—the state's lowest rate in over a century.

And while some researchers assumed there would be another baby boom during the pandemic, the stay-at-home orders apparently have had the opposite effect, resulting in historic lows for births across the country.