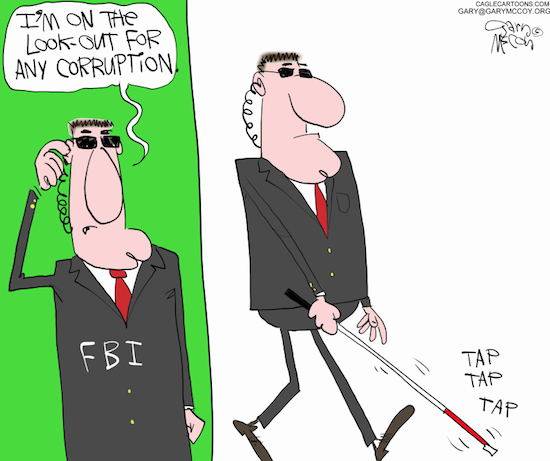 --that the top brass at the bureau had worked to create an "insurance policy" that could be used to overthrow President Trump from office?

Writers and television pundits would always couch any criticism of the bureau in some respectful language like "we're only talking about high-ranking officials here, not the FBI, itself, which is filled with the best agents in the world who are always looking out for America."

I think we can dispense with the overly protective pleasantries at this point.  The FBI is a goon squad of un-American thugs who have taken the worst elements of East Germany's Stasi police state and Cosa Nostra's organized crime and turned them into a blueprint for exercising and keeping illegitimate power over their enemies.  They aren't a law enforcement organization, and they certainly don't give a rat's rear end about justice.  They're regime enforcers with badges.

If the stated reason for the FBI's inception was to pursue federal crimes that might otherwise be unenforced or overlooked in the interstate wilderness separating local jurisdictions, J. Edgar Hoover wasted no time turning the bureau into a personal domestic intelligence force capable of intimidating political enemies and insulating himself from potential removal through the use of blackmail.