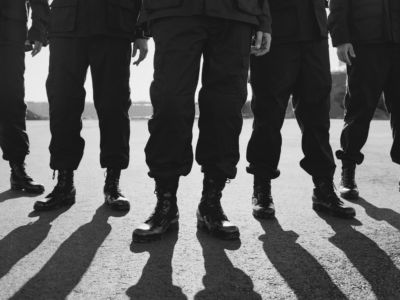 One of the most important aspects of the proposed Constitution was its authorization for a permanent national standing army, a striking contrast to the simple reserve constituting the state militia. The standing army was a particular objection of the Antifederalists, who, in the liberal antimilitary tradition, believed such an army to be inimical to the liberty of the American people. In contrast, the ex-Continental Army officers, particularly the higher officers, yearned for the power, the pelf, and the prestige that would come to them once again, and this time permanently, should there be a standing army. The leading and most aristocratic ex-army officers were cohesively organized in the ultra-reactionary and militaristic Society of the Cincinnati, which looked for a European-type army established, preferably led by a hereditary officer caste. The ex-Continental Army officers and particularly their upper strata in the convention, eagerly welcomed and fought for the proposed Constitution as their long-awaited conduit to a caste status in a standing army. Elbridge Gerry, indeed, feared the power of the Cincinnati, and this was one of the reasons why Gerry (and George Mason) opposed the popular election of the president at the convention:

The ignorance of the people would put it in the power of some one set of men dispersed through the Union and acting in concert to delude them into any appointment…. such a Society of men existed in the Order of the Cincinnati. They were respectable, United, and influential.1

The ex-officer and Cincinnati support of the Constitution played a definite role in Pennsylvania. Ten delegates to the state convention were members of the Cincinnati, and all were Federalists; furthermore, of the ex-army officers among the delegates above the rank of captain, sixteen out of seventeen were Federalists. This, of course, combined nicely with the bulk of the wealthy and educated being in favor of the Constitution.