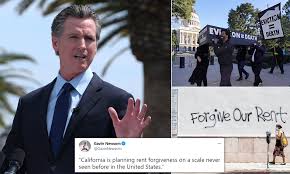 The Governor, who is facing a recall election expected in the fall, is also likely to extend a ban on evictions for unpaid rent beyond June 30 - a pandemic-related order that was meant to be temporary but is proving difficult to undo.

The 53-year-old Democrat, who finds his state flush with unused federal Covid relief cash and surplus tax income, is also going to splash another $2 billion to cover the costs of electricity and water for lower income households.

Announcing the measures last week, Newsom said: 'Anybody that's been impacted by this pandemic that can't pay their rent, we will pay 100 percent of your rent going back to April of last year.

'Anybody that's impacted by this pandemic that can't pay their rent and can't afford their water bill or their utility, California will pay those bills.'

But the state, like many others, finds itself with more money than expected after Congress bailed out local governments from federal coffers.

California is poised to cover not just unpaid rent, but also another $12 billion back to taxpayers through stimulus checks worth $600 to millions of middle-class citizens.