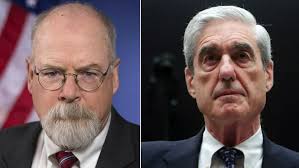 It's also the story of the convergence of John Durham and Robert Mueller: how Durham uncovered the FBI's crimes and how Robert Mueller's FBI disputed the innocence of the men the FBI framed.

The FBI knocked and Mike Albano opened the door. It was 1983. As a member of the Massachusetts State Parole Board, Albano thought he had been doing his job when he looked into voting to commute the sentence of Peter Limone, who along with Joseph Salvati, Henry Tameleo, and Louis Greco, had been convicted for the murder of Teddy Deegan in 1965.

Those convictions never sat right with Albano – he was savvy to Massachusetts and the convergence of the Mob and law enforcement. His suspicions of the convictions, and sympathy to the four men, only grew when he met with Greco, who proclaimed his innocence and said "he wanted to live one day as a free man, just one day."1