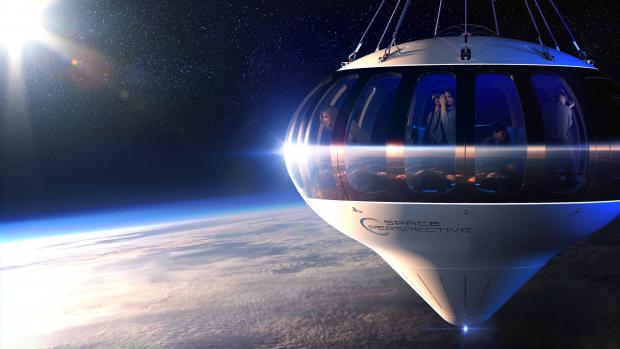 Your ride is the Spaceship Neptune, which we first heard about last year. It's a pressurized (and hopefully well heated) capsule hanging from an "advanced spaceballoon" the size of a football stadium – presumably something even larger than the Big 60 zero-pressure scientific balloon NASA launched in September 2018.

That 60-million-cubic-foot (1.7-million-cu-m) monster was made by South Dakota's Raven Aerostar, from a delicate polyethylene material just one hundredth of a millimeter thick. Its skin, laid flat like kitchen wrap, would cover about 20 acres of land. It set multiple world records, carrying a 1,650 lb (750 kg) payload to a sustainable altitude of 159,000 ft (48,463 m), and it was filled with enough helium to make anybody sound funny.

This one looks like it'll be lifting substantially more. Each Spaceship Neptune flight will lift one pilot, eight passengers, nine "reclining, plush seats," a refreshments bar, a Wi-Fi communications system capable of live-streaming, 360-degree panoramic windows and a below-deck toilet – as well as the weight of the capsule itself.

The six-hour journey will top out at around 100,000 ft (30,480 m), where guests will have two hours to have their gobs smacked by the sight of the sun rising over the clearly curving horizon of the Earth – if they believe in such a thing – and a nearly-unfiltered view of the stars beyond 99 percent of the wispy-thin layer of atmosphere that makes this planet home. You'll be able to see about 450 miles (724 km) in every direction.

"Don't forget your camera," says Hall of Fame Astronaut and Space Perspective's Senior Technical Advisor Jeff Hoffman. Um, nobody's forgetting their camera, Jeff. You'll have two hours up there to bang out some mad selfies or make sick TikToks pointing out how only space-station dwellers and Snoop Dogg are higher than you right now, before the balloon begins its decent.