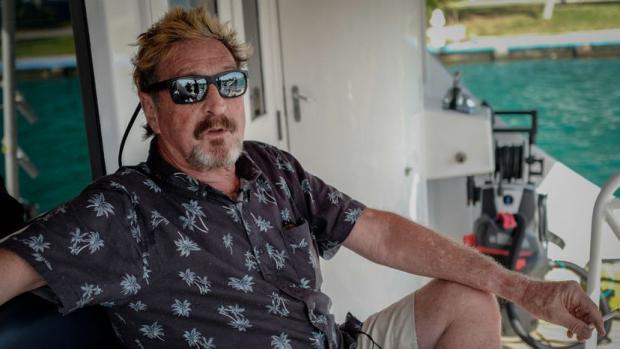 A SUICIDE note was reportedly found tucked inside the pocket of tech guru John McAfee's hanged body, it emerged on Friday.

The letter's discovery came after the 75-year-old tech guru's wife claimed they spoke on the phone hours before he was found dead - with his last words to her being: "I love you and I will call you in the evening."

The discovery of the late software millionaire's note was credited to an anonymous source who was not authorized to speak about the investigation into his death, according to the Associated Press.

McAfee's Spanish lawyer, Javier Villalba, said the family had not been formally made aware of the note by authorities.

The billionaire had been bunking with another cell mate but was reportedly alone when he died, Reuters reported.

Meanwhile, an autopsy is being conducted to determine the cause of death.

The late fugitive's family is seeking to perform a second independent autopsy pending the results of the official one and left open the possibility of taking legal action after the investigation into his death ends, McAfee's lawyer, Javier Villalba told the publication.

The 75-year-old British-born maverick was found dead in his cell at Brians 2 penitentiary in Barcelona, Spain, on Wednesday.

McAfee's hanging death came hours after a judge had approved his extradition to the US to face federal indictment for evading more than $4 million in taxes.

Medics were unable to revive McAfee, with Spanish law enforcement sources told El Pais, concluding that, "Everything points to suicide."