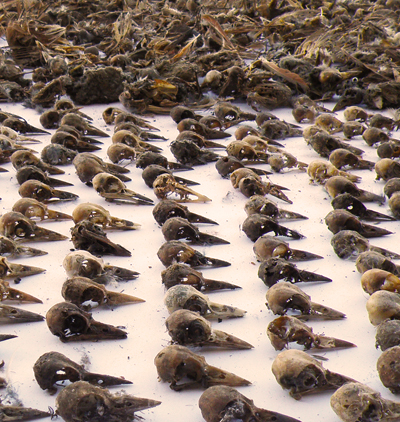 Before they die, a lot of these birds are exhibiting very strange symptoms.  Experts are telling us that in many cases birds are developing "crusty or puffy eyes", and often they appear to go completely blind.  In addition, quite a few of these dying birds lose their ability to stay balanced, and we are being told that some even seem to be having "seizures".  If scientists understood what was causing this to happen, that would be one thing.  But at this point they have no idea why this is taking place, and that is quite alarming.

So far, confirmed incidents of this strange phenomenon have been documented in Washington D.C., Virginia, West Virginia, Maryland, Kentucky, Ohio and Indiana.

Could it be possible that we are dealing with a "mystery disease" that started in one state and that has now spread to other surrounding states?

Or is something else going on here?

We are being told that "blue jays, common grackles and European starlings" are the most common birds that are being affected.

But whatever is happening is not just limited to one species of birds, and I think that should be a red flag.