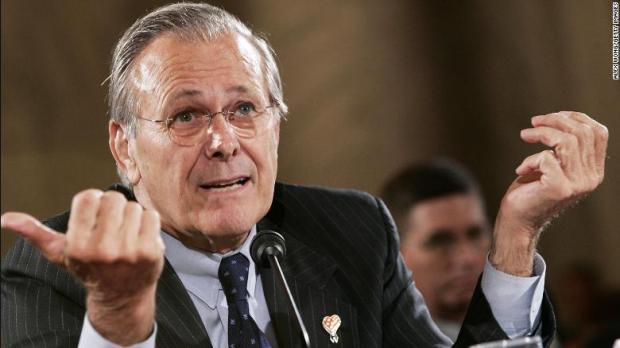 Rumsfeld was kind of the Fauci of the early 2000's, a relatively faceless bureaucrat who circumstance selected to serve in a glamorous role as a symbol of the zeitgeist of his time. Rumsfeld became the rock star of George W. Bush's 2002 Iraq war.

He warmed to the camera, after spending many years in relative obscurity in the revolving-door world between highly-paid positions in the "private sector" and battery-recharges back in senior government positions.

To keep your value to the weapons manufacturers you must constantly re-steep yourself into the world of the bureaucracy and also the world of the Congressional-military-industrial complex. You have to dip your beak into the endless river of military appropriations and the (deep state) people who grease the skids of billions of dollars to the war industry.

Otherwise you do not know what buttons to push to deliver billion dollar contracts in exchange for million dollar salaries.

In this endeavor, Rumsfeld was not the worst offender, it must be said. He was, unlike our current Defense Secretary, never on the board of missile-maker and death-dealer Raytheon. In fact his credentials in the war industry were paltry compared to the new breed of "public servant" in Pentagon leadership.