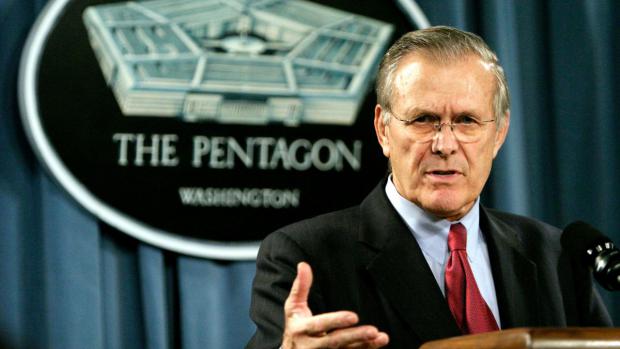 The imperial media are giving their fallen master a king's tribute, with headlines describing the psychopathic war criminal as "a cunning leader", "a man of honor and conviction", or simply as "Former defense secretary at helm of Iraq, Afghanistan wars"

The cancerous Washington Post, who just the other day mocked the life of the late antiwar hero Mike Gravel with an obituary branding him the "gadfly senator from Alaska with flair for the theatrical," describes the child killer Rumsfeld as the "influential but controversial Bush defense secretary" in its headline about his death.

The New York Times wasn't much better. Take the headline "Mike Gravel, Unconventional Two-Term Alaska Senator, Dies at 91 — He made headlines by fighting for an oil pipeline and reading the Pentagon Papers aloud. After 25 years of obscurity, he re-emerged with a quixotic presidential campaign." Compare this to the headline "Donald Rumsfeld, Defense Secretary During Iraq War, Is Dead at 88 — Mr. Rumsfeld, who served four presidents, oversaw a war that many said should never have been fought. But he said the removal of Saddam Hussein had 'created a more stable and secure world.'"

244 people are talking about this

There's been criticism as well, of course; online sentiments about Rumsfeld's death have not been nearly as worshipful and hagiographic as they've been toward other disgusting war whores like John McCain. But in the end all that matters is that he lived a long, full life, without ever having faced even the slightest single consequence for the horrors he unleashed upon our world; without even so much as sustaining any meaningful damage to his reputation.

"We Own the Science and the World Should Know it"