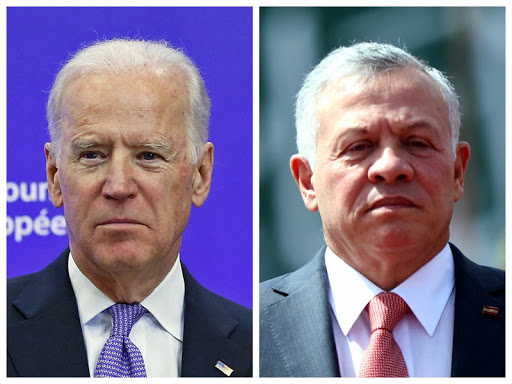 Jordan's King Abdullah left for the United States on Thursday for a three-week visit that includes the first meeting by an Arab leader with President Joe Biden at the White House since he took office, a palace statement said.

The statement said the monarch, accompanied by his wife Queen Rania, would attend an investors meeting followed by a private itinerary ahead of a working visit to Washington for talks with congressional leaders and administration officials.

An official said the king's talks with Biden were expected some time after mid-July.

The staunch U.S. ally will lobby senior officials for an extension of a five-year $6.4 billion aid package that ends next year to help shore up Jordan's struggling economy, the official added.

Washington is Jordan's single largest source of bilateral assistance, providing more than $1.5 billion every year, and the kingdom ranks among the top recipients of U.S. foreign aid, U.S. diplomats say.

Biden reaffirmed strong U.S. support for the monarch shortly after the kingdom announced it had quashed a rift within the royal family that shook Jordan's image as a beacon of stability in the region.

Abdullah had strongly opposed former U.S. President Donald Trump's Middle East peace plan, which he saw as a national security threat that would also undermine his Hashemite family's custodianship of the holy sites in Jerusalem.

Officials say the shift in U.S. policy under Biden towards a more traditional commitment to a two-state solution to the Arab-Israeli conflict has relieved pressure on Jordan.

The 'Great Game' Moves On