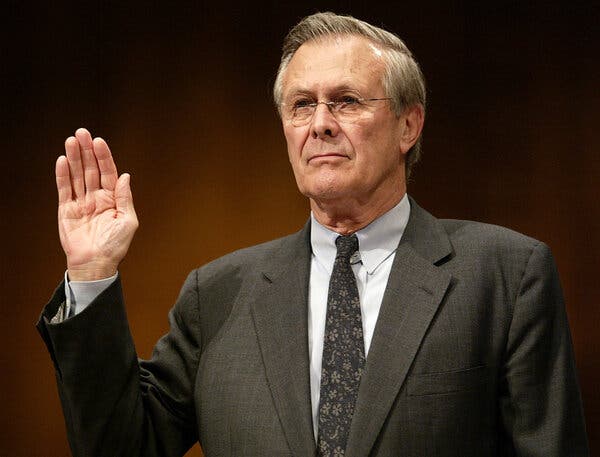 In my time as a US intelligence officer and UN weapons inspector, I was twice privy to the former US defense secretary's MO: to manufacture and manipulate 'intelligence' so as to start wars. The Devil will need to watch his back.

While I never met Donald Rumsfeld in person, our paths crossed indirectly on several occasions. What I learnt from these experiences hardened my heart toward a man who caused so much harm based on actions that placed ambition over integrity.

In the days following my September 3, 1998, testimony before a joint session of the Senate Armed Forces and Foreign Affairs Committees, where I challenged the US government's inconsistent policies regarding the disarmament of Iraq, I received a letter from the former defense secretary. When I heard yesterday that Rumsfeld had passed away at the age of 88, I re-read the letter and ruminated about the man who wrote it, and how I felt about him in retrospect.

Any direct communication from a former cabinet member – especially a secretary of defense – is not to be trifled with, especially if it is complimentary in tone and content.

"Dear Mr. Ritter," Rumsfeld wrote, "I watched you on C-SPAN as you presented your testimony to the Senate Foreign Relations Committee."

"It was a superb job. You presented your position thoughtfully, constructively, and forcefully, and were not blown by the winds from the other side of the table. Congratulations on your testimony. Congratulations on your performance on behalf of the UN and the United States.  Know that you have my best wishes for what I am confident will be a superb future. We need more people like you in our wonderful country, and the example you are setting is a proud one."

Germany and EU Have Been Handed a Declaration of War

Nothing's More Important Than Avoiding Nuclear War: Notes From The Edge Of The Narrative Matrix

Kissinger Warns Washington Warmongers: "Not Wise To Include Ukraine In NATO"

Is the US on a War Footing?

The Narrative That This War Was "Unprovoked" Prevents Peace