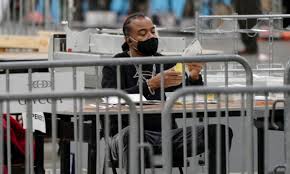 "I think people are saying enough is enough," Raffensperger said during a Just the News podcast on June 30.

"I'm tired of it, but so is everyone else who lives in the other 158 counties [in Georgia]."

Raffensperger, a Republican who has been frequently criticized by former President Donald Trump after the 2020 election, stated that he will invoke Georgia's recent election integrity law that allows Georgia's Elections Board to take over elections operations in localities that have issues with counting ballots.

The law, SB 202, was approved by the Georgia state Legislature and signed into law earlier this year. The Department of Justice announced last week that it will file a civil rights lawsuit against the measure.

Raffensperger was asked during the podcast about whether he would recommend that the Elections Board take over Fulton County by using the law.

"Yes is the answer to your question," he said.