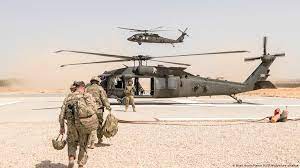 Now, US troops are rushing out of the country as fast as they can, having just evacuated the symbol of the US occupation of Afghanistan, Bagram Air Base.

While perhaps not as dramatic as the "Fall of Saigon" in 1975, where US military helicopters scrambled to evacuate personnel from the roof of the US Embassy, the lesson remains the same and remains unlearned: attempting to occupy, control, and remake a foreign country into Washington's image of the United States will never work. This is true no matter how much money is spent and how many lives are snuffed out.

In Afghanistan, no sooner are US troops vacating an area than Taliban fighters swoop in and take over. The Afghan army seems to be more or less melting away. This weekend the Taliban took control of a key district in the Kandahar Province, as Afghan soldiers disappeared after some fighting.

Whatever the case, I am sure I am not the only American wondering whether we can get a refund. The product is clearly faulty.

Biden: "This is not about freedom or personal choice." It's all about TYRANNY!