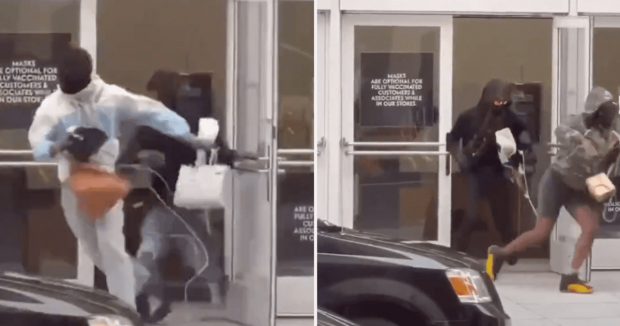 The merchandise-laden suspects were seen running out of the store before jumping into a getaway car that sped off. According to KTVU's Henry K. Lee, at least 9 people were involved.

More on San Francisco's rampant looting, via the Examiner:

A man was caught on video in June filling a garbage bag with what appeared to be hair products before leaving the drugstore on his bicycle. A security guard, who was recording the incident, tried to grab the individual, though he eluded custody.

Walgreens shuttered 17 of its stores in the San Francisco area in the past five years, and the company said thefts in the area are four times more likely than anywhere else in the country as executives budgeted 35 times more for security personnel to guard the chains.

Target executives in the city also decided to limit business hours in response to an uptick in larceny.

Shoppers can no longer buy products in the chains after 6 p.m. after once being permitted to shop until 10 p.m.

"For more than a month, we've been experiencing a significant and alarming rise in theft and security incidents at our San Francisco stores," said a Target spokesman.

1/2: At least 9 escape with handbags & purses from @neimanmarcus @UnionSquareSF after smashing display cases & snatching them from racks, just minutes before store closed, in this video shared w/@KTVU. @SFPD investigating pic.twitter.com/crg3gEVwiU