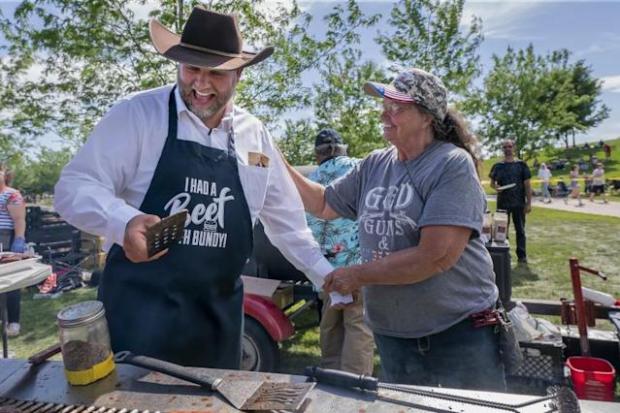 When Ammon Bundy announced his run for governor of Idaho during a recent barbecue, he cooked up quarter-pound "Bundy burgers" made from a cow that his father unlawfully grazed on federal lands, part of a rebellion that triggered an armed standoff with authorities in 2014.

The sizzling patties conveyed that Bundy, despite pursuing something so mainstream as running for office, remains the defiant anti-government militant who has earned folk-hero status with the far right. He's still focused on radically reducing federal land ownership in the West, property that belongs to the U.S. public but is coveted by ranchers, farmers, developers and others.

"When you lose control of the land, you lose control of everything," Bundy said standing on an outdoor stage between cardboard cutouts of Ronald Reagan and Donald Trump, both of whom favored opening federal lands to development. "History and human nature demonstrate that if we build up and create dense and congested cities with large populations, traffic and pollution, we will lose our conservative, traditional values."

Bundy is reframing the decades-long but narrow fight of his father, Cliven Bundy, against the Bureau of Land Management — the other BLM, as it's known here — into a platform with broader appeal. He wants to use the governorship to wrest ownership of federal land for state control. It's a campaign aimed at voters dreaming of wide open spaces and homes they can afford, wrapped in an idealized view of western life where land and resources are limited only by an unwillingness to use them.

Neither America nor the Gem State, he told the crowd, can survive the liberal creep of growing cities or the economic toll of too few houses for too many people. To "keep Idaho Idaho," as his slogan promises, growth needs to happen out instead of up, as he puts it.