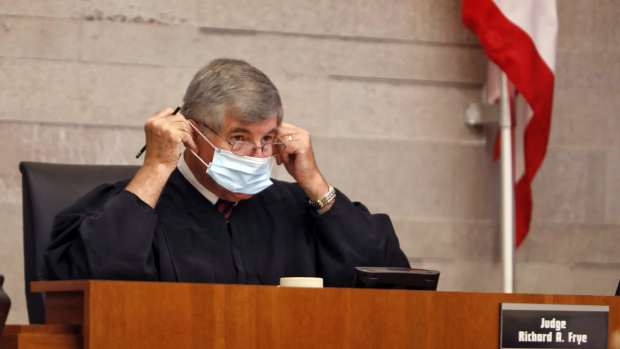 Last week, I wrote about Ohio state Judge Richard Frye requiring defendants to take experimental coronavirus vaccine shots as a condition for probation, with probation being the means by which defendants can avoid being sent to prison. Frye had insisted that none of the people he had ordered to take the shots had expressed any philosophical, medical, or religious objection. He said his imposition of the probation requirement was just intended to help the defendants overcome their "procrastination" regarding taking the shots.

I wrote that many defendants who have made up their minds not to take the experimental coronavirus vaccine shots, some of which are not even vaccines under the normal meaning of the term, would keep quiet about their objections and even say "thank you sir" to the judge when the judge pushes the probation condition. Defendants in such a situation will likely fear of the repercussions of countering the judge who holds the power to punish the defendants, harshen their probation conditions, or even send them to prison if they don't just acquiesce.

In an interview at WSYX-TV of Columbus, Ohio, Sylvaun Latham, one of the defendants given the shots-taking probation condition by the judge explains how things went down in the courtroom. The description is far from the image Frye presented to media of a judge kindly helping nonobjecting defendants overcome their procrastination about taking the experimental coronavirus vaccine shots.

The WSYX-TV story provides details from Latham about what happened when in court Frye threw out the three-year probation deal struck between Latham's attorney and prosecutors to present a new probation plan with a key shots condition added:

'The whole atmosphere of the courtroom changed,' said criminal offender Sylvaun Latham who was sentenced for a gun and drug charge last week before Common Pleas Court Judge Richard Frye. 'Everyone had this look on their face. I broke character and asked (my attorney), "Can he do this?"'
…
'I know Judge Frye's reputation,' said Latham. 'I know he's known for giving the max time. I don't want to go to jail. I also don't want to have five years probation.'