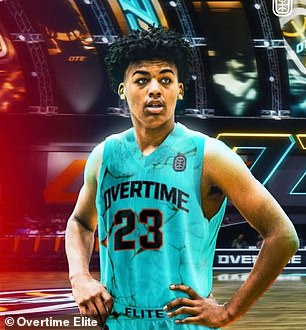 High school junior and star center Jalen Lewis - who is 6'9 tall, and weighs 215 pounds, has inked a multiyear deal with 'transformative' basketball league Overtime Elite, according to a report by The Athletic.

News of the deal emerged Friday. Lewis, who attends Bishop O'Dowd High School  in Oakland, California becomes the latest signing for Overtime Elite, a new league for the nation's most promising young basketball players started by sports media company Overtime in March. It intends to target around 30 players who have potential to become future NBA stars, and is said to have signed 10 so far.

'110% Committed! OTE Let's Rock!' the massive 16-year-old captioned a picture of him wearing the Overtime Elite gear posted to Twitter.

Lewis, who ESPN ranks No. 2 overall for the Class of 2023, has already received offers from at least a dozen schools, including collegiate basketball powerhouses Kansas, UCLA, Kentucky Duke, and Michigan.

His deal with Overtime will forbid him from playing for his school or university.