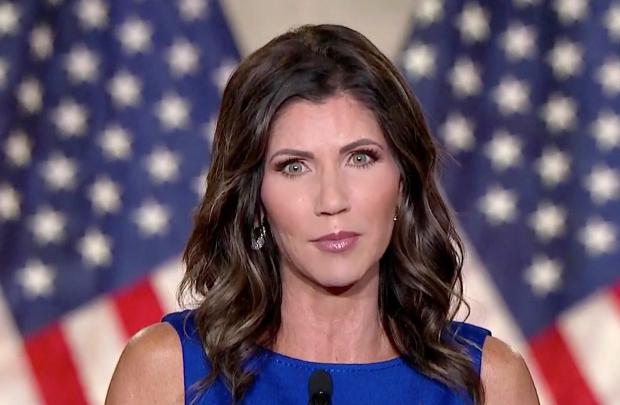 South Dakota Governor Kristi Noem has railed against fellow GOP governors who enacted COVID-19 restrictions during the pandemic - questioning their the 'grit and instinct'.

Speaking at the Conservative Political Action Conference in Dallas on Sunday, Noem suggested that some Republican governors were 'rewriting history' by refusing to acknowledge that they shut down states for a period of time.

'Now I'm not picking fights with Republican governors. All I'm saying is that we need leaders with grit. That their first instinct is the right instinct,' she continued.

'Demand honesty from your leaders and make sure that every one of them is willing to make the tough decisions. South Dakota did not do any of those measures. We didn't mandate. We trusted our people and it told them that personal responsibility was the best answer.'

Noem took a moment to note how she never forced a 'single business' to close attempting to draw a comparison to Florida Governor Ron DeSantis and Texas Governor Greg Abbott who were more restrictive in their approaches.

South Dakota's population is 880,000 compared with Florida's 21.4 million and Texas at 29 million people.