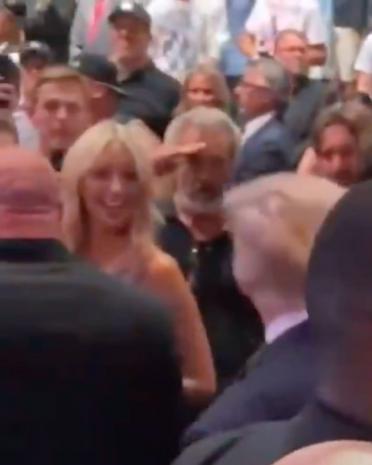 Video footage has gone viral, of what appears to be the actor and film director showing respect and polite recognition of Donald Trump at the UFC 264 between Conor McGregor and Dustin Poirier in T-Mobile Arena.

The "Lethal Weapon" movie star seemingly saw Trump moving through the fighter tunnel, saluted him, and the audience went wild.

Previous photographs and videos show Gibson at the event. This suggests he really is the man applauding Trump and seeming ecstatic to see the former president.

Gibson shared a video of himself shortly after arriving at the venue.

"I want to see the rematch, you know, best out of three," he can be heard saying. "I do not care who wins, I just want it to be a good match–and I am sure it will be."

People in the audience applauded the former president and began repeatedly chanting the letters "U-S-A, U-S-A." Some spectators booed and several of them at least acknowledged Trump's presence.