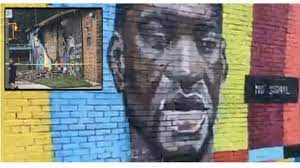 After the mural collapsed, people were initially unaware of the cause, with one city inspector commenting it was "just age – it just came away," noting that the mural had been bowing.

Witnesses later confirmed that it had been destroyed by what the insurance industry used to refer to as an "act of God."

"A mural honoring George Floyd erected at Summit and Lagrange in Toledo has collapsed," reported "13 ABC. "According to Toledo Police, witnesses say it was destroyed by a lightning strike. 13abc's Doppler Radar did show a lightning strike in that block at about 4:30 PM this afternoon."

UPDATE: Witnesses have told authorities that the George Floyd mural was struck by lightning before it collapsed. https://t.co/u0QHZVh7Zp

No doubt if lightning hadn't been quickly established as the cause of the collapse, Black Lives Matter supporters would have begun claiming the incident was some sort of hate crime.

No doubt that some will denounce God as a racist for this grossly bigoted act and demand his immediate cancellation.

The George Floyd Memorial mural at Summit and Lagrange in Toledo has come down. No word yet on the circumstances #13abc pic.twitter.com/SkB2eDhijB