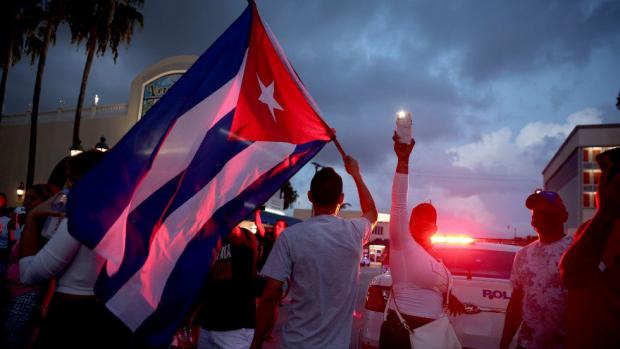 The first Cuban protester has died after police allegedly opened fire on a peaceful demonstration while an anti-government reporter was arrested live on TV as the unrest continues on the Communist-run island.

Diubis Laurencio Tejeda, 36, died on Monday in a suburb of Havana during a clash between protesters and police, the Interior Ministry said.

The ministry said Tejeda was part of a group of protesters that had attacked a government facility in the La Guinera neighbourhood of Havana and did not say what caused his death.

But witnesses said security forces had responded with gunfire after some demonstrators had thrown rocks at them.

'I think the Communists have lost control, they won't have a solution to this situation,' said resident Waldo Herrara, 49. 'The people are tired of so much humiliation, so much repression.'

Thousands of Cubans took to the streets of Cuba on Sunday while chanting 'down with the dictatorship' in the biggest anti-government demonstrations on the Communist-run island in decades.

Cubans are protesting over high prices and food shortages and other grievances against the government such as their handling of the pandemic.

The protests continued on Monday in the southern Havana suburb of La Guinera, where Tejeda died and several others, including members of the security forces, were hospitalized with injuries, according to state-run media.