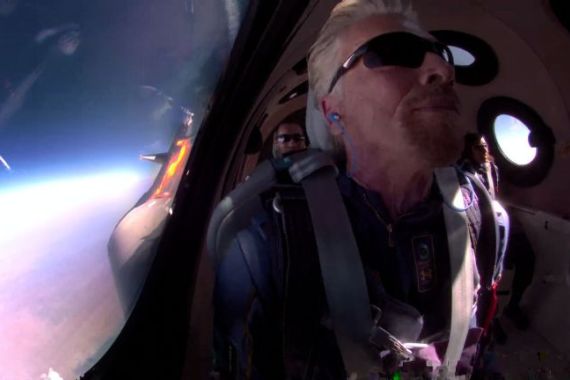 A shoeless Sir Richard Branson hit back at the backlash to his Virgin Galactic spaceflight after left-wing pundits questioned if it was a 'misuse of resources'.

Sir Richard, who become the first person to go to space in his own rocketship, beating fellow billionaire Jeff Bezos by nine days - said that space is important for humanity and he has always been a 'dreamer'.

The entrepreneur, 70, addressed the criticism while appearing on the 'The Late Show' without his shoes or socks on and with host Stephen Colbert jokingly asking why all billionaires go barefoot.

When asked about concerns that going to space is a 'misuse of resources', Sir Richard argued that the critics of space travel are not fully educated in the benefits of it.

He explained: 'I can understand it, but I think maybe they are not fully educated as to what space does for Earth.'

Sir Richard claimed that we need more rocketships going into space because they can help us to monitor 'things like climate change'.

He continued: 'Space is connecting the billions of people who are not connected, on telephones, on other things.

'Space is, I mean every single spaceship we sent, whether it's Virgin Orbit which we launched a week before into orbit, putting satellites up there and monitoring different things around the world, like the degradation of rainforests or monitoring food distribution or monitoring things like climate change and so on.