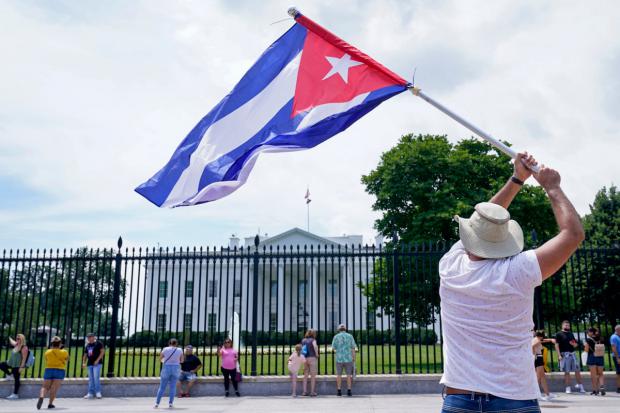 Homeland Security Secretary Alejandro Mayorkas on Tuesday warned would-be migrants fleeing the turmoil in Cuba and Haiti not to try and reach the United States illegally by sea.

The Cuban-born member of Biden's cabinet said the voyage is too dangerous and they will not be allowed to enter, even if they say they are fleeing persecution.

'Let me be clear: If you take to the sea, you will not come to the United States,' Mayorkas said at a news briefing.

Coast Guard officials are monitoring by air and have not seen a surge in migrants since the unrest in Cuba began on Sunday and the assassination of Haiti's President Jovenel Moise last week, he said.

Mayorkas, whose family fled the Communist takeover of Cuba in 1960, said the issue had personal significance to him. He also stressed the danger of the journey.

'This risk is not worth taking,' he said.

The demonstrations in Cuba turned bloody overnight when the first protester was killed when police opened fire on a 'peaceful' crowd.

Anti-government reporter Dina Stars was also arrested live on TV while speaking with Spain TV host Marta Flich about the anger against the communist regime.

U.S. officials were prepared to deal with any surge, he added.

President Joe Biden said Monday that he stands with the 'remarkable' Cuban protesters and 'their clarion call for freedom' amid demonstrations that brought thousands to the streets from Havana to Santiago on Sunday.