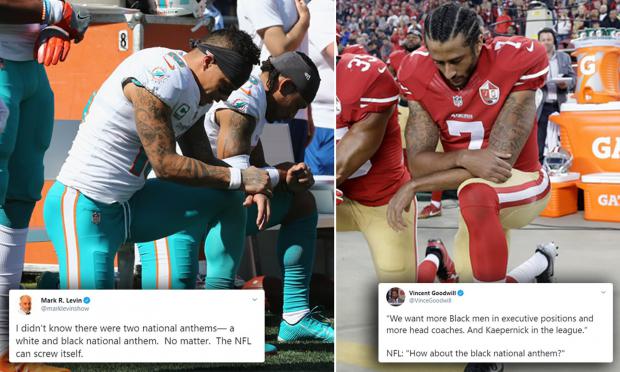 A source recently told Front Office Sports that the NFL is "bringing back a lot of [social justice] elements from last year," including helmet decals with left-wing messages, sideline signage, and the playing of the song "Lift Ev'ry Voice and sing" — the purported "black national anthem" — major events.

The source told Front Office that the 2021 social justice effort may even be bigger than previous campaigns.

For one, there will be more slogans such as this below:

The themes for some of the campaigns this year includes, "It Takes All of Us," "End Racism," and "Inspire Change."

It isn't clear if every TV partner will broadcast the playing of the national anthem — which will be followed this season by "Lift Ev'ry Voice and Sing" — but Front Office noted that at least NBC has agreed to air both songs.

The NFL insider added that it will impose the "black national anthem" on all special events such as the Super Bowl, the playoffs, the draft and other such special broadcasts.

The source also said that going forward all players will be free to protest against the U.S.A. in any way they choose, as long as it is a "peaceful protest."

Front Office added that it is possible the flood of social justice protests and messages harmed the league's TV ratings:

At the height of player protests during the 2016-17 seasons, the league's once impregnable TV audiences plummeted 8% and 10% respectively.

As the protests receded, the NFL's TV audiences bounced back to grow 5% apiece during the 2018-2019 seasons.

But average audiences fell 8% to 15.1 million viewers in 2020 as the league embraced social justice messaging on helmets, warm-up gear, fields and stadiums.